The products in question are Computersave’s “Computersognathus,” or “compII” for short. It has been a tumultuous year for Computersave (a company which is absolutely not the same as CompuServe; mistake them and their lawyers will keep you up until dawn). The struggling computer hardware manufacturer saw its stock skyrocket after showing it could change the form factor of any smart home device, such as Amazon’s egg-shaped Echo Dot, into that of a bipedal creature with an adorable snout.

“It looked like a baby dinosaur hatching!” said Cynthia Williams, a local kindergartener, as she was being treated for minor face wounds at the Armstead Hospital. She said it was, “Very scary, but I still want one.”

The Armstead County strip mall was flooded with people far over capacity, but the fire marshal permitted attendance since they were “preoccupied.” Eye witnesses say the fire marshal was near the front of the pre-order line.

One Best Buy employee blogged, “these morons who cant even sync a apple watch out here demanding the shiy new thing. im telling them if they cant name the founders of linux they go to the back of the line. lol one old lady cried.”

The employee’s family has requested his name be withheld. Media has identified him solely by his social media handle, Elrond_Hubbard.

A hush fell over the crowd at 10:23 AM, the time Computersave had designated for “the hatching of a new era.”

Every smart listening device on display throughout the store vibrated – even those units that had not opted into the program. Many reported hearing a single child begin crying that the one square-foot orbs did not produce sixty-foot tyrannosauruses. In hindsight, parents were relieved for the discrepancy, given that all the mechanical hatchlings promptly attacked the crowd.

“who cant fight off a tiny dinosaur? lmao i could crush these things all day,” wrote Elrond_Hubbard at the beginning of the thread that soon went viral. Other clerks from the Best Buy have since disputed that their fellow employee spent most of the incident locked in a closet.

The internet is full of videos from this and similar “hatching” events around the world, with the newborn compIIs promptly looking into the camera—and then eating it. Some customers tried dialing for help, only to be targeted and attacked in kind. It wasn’t until hours later that engineers discovered that every text, call, and Instagram update was a ping for the compIIs to destroy competing products.

A Computersave press statement released that evening said, “Nobody mentions how helpful the compIIs tried to be. They auto-Googled first aid tips for any injuries they inflicted. Dozens of units harmonized broadcasts of soothing music. There’s that one viral video of a compII calling 9-1-1 to report itself as it was trying to eat its owner’s hand.”

Elrond_Hubbard liveblogged that he was heroically showing “the plebs” the off-switch on their compIIs.

Computersave confirms that compIIs are designed to be entirely voice-commanded do not have an off-switch. Elrond_Hubbard will be buried at a private service Wednesday.

For once a major product release day saw customers stampeding out of the store. Local mother Serena Harris said, “I’ve survived too many Black Fridays to get done like that.”

Like other survivors, Mrs. Harris dropped her phone and noticed that the compIIs went after the devices rather than customers. Few compIIs pursued anyone off of the premises, and those were distracted when someone threw a tablet at them.

“I lived, but my iPhone abruptly became $700 pet food,” said Bijan Al-Mommahed, an area veterinarian. He said he’d take the loss as a lesson. “I’ve wanted to spend less time on Facebook anyway.”

Computersave has deactivated as many compII units as it can—what some experts estimate as a “nice” sixty-nine percent of units. The remainder keep bouncing back a “connection dropped” error and are still prowling.

A company spokesperson said, “We have a long history in making positives out of negatives. If we’re going extinct, we might as well make a profit. That’s why we introduced RaptorCoin onto the market last week.”

All deactivated compIIs had their processors overclocked and preoccupied by cryptocurrency mining, granting no spare processing power to attack civilians. The company hopes the launch of RaptorCoin will help its stock rebound from current record lows, and help them pay some of their legal fees.

As of Tuesday morning, the company has not acknowledged reports of compII swarms attacking rival cryptocurrency operations.

Meanwhile Armstead County citizens are advised not to log in to any unrecognized “free” wi-fi, as the compIIs have adapted a few such services as hunting tools for more phones. Authorities stress for the public to stay clear of the strip mall, where a pack of compIIs have been resiliently nesting. Wildlife advocates have also flooded Armstead with lawyers, attempting to establish the Best Buy as an endangered species habitat.

For the interim, this publication recommends that all readers set their phones in Airplane Mode and simply talk to your friends in person. Maybe pick up a newspaper. If we’re lucky, maybe digital becoming so dangerous is what will save print from dying out. 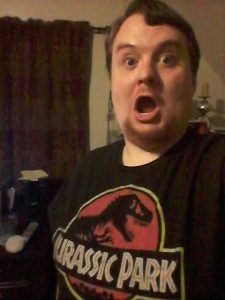 John (@wiswell) is a writer who lives where New York keeps all its trees. His stories have appeared at Fireside Magazine, Daily Science Fiction, and Podcastle. He has a lifelong dream of being eaten by a T-Rex, and would settle for a robot one if you have affordable rates.

The illustration is by Kelsey Liggett!