The Six Raptor-Wives of the Utah Rangelands

Following standard procedure, Evelyn recalled the raptors, but not before the others had also winked out on radar. Parr returned immediately, but it was another two hours before Boleyn and Howard appeared.

Odd. Like the prehistoric creatures they were modeled after, the autonomous dromaeosaurs were programmed to hunt in a pack. There should have been no significant discrepancy between their arrival times.

Seymour and Cleves never returned at all.

Six gynoid raptors—the pinnacle of groundside drone technology. Each worth a quarter of a million dollars.

And she was missing three.

“It’s fine, this is fine,” Evelyn murmured to herself, her mind flashing with panic. Just last week she’d pulled an all-nighter to put out a small media fire surrounding the possibility of adding a seventh raptor named Henry. Tipsy with tiredness, she’d complained to the Wives about wanting to run and hide. Had they somehow internalized that message?

The logs said all the raptors had detected GNSS satellites before going out this morning. Until they fell off the grid, none had reported an interruption to their radar navigation. Evelyn didn’t understand it. If a loss of signal had occurred, why hadn’t the raptors’ fail-safe functions kicked in, returning them to base?

“I want to see their video feeds,” she told one of the programmers, who informed her, as politely as possible, that he’d already started going through them the moment Aragon disappeared.

“They split off during a hunt, losing visual contact with each other. That’s all we’ve got.”

He thought about it. “Best-case scenario? We’ve somehow lost our connection to their live feed, their trackers are down, and a minor malfunction with their gyroscope has them wandering in circles somewhere.”

Company patrols hadn’t found them within their assigned hunting area so that seemed unlikely. It was almost like the raptors were deliberately dodging them. “And worst-case?”

“Really? I thought ‘gone rogue and eaten a small child’ would have ranked higher.”

The programmer gave her a blank look. “They don’t…you understand the raptors don’t eat the deer, right? They don’t have digestive tracts.”

Evelyn repressed the urge to pinch her nose. “I’m joking.”

He had a point, though. Maybe someone from the Coalition for God’s Planet had finally decided to make good on their threats to destroy the raptors. The Coalition claimed it was God’s will that the mule deer population exploded in Utah, and any attempts to curb the disastrous results was ‘interfering’ with a higher power.

It was bullshit, of course. Thankfully, most rational people seemed to understand the need for a controlled, ecologically-safe solution to the chaos, and the Initiative had a hell of a PR department to change the minds of those mysteriously reluctant to the idea of large, steel predators roaming the Utah rangelands.

Evelyn still had one of the posters from the last ad campaign, featuring Aragon in a fun, minimalist design, except for her detailed back stripes—purple in Aragon’s case—and an “A” emblazoned on her long flank. She stood in profile, framed by aspens and text that read: HAVE NO FEAR—UNLESS YOU’RE DEER!

Aragon wasn’t even Evelyn’s favorite—that honor went to Boleyn, the pack’s assigned alpha—but she felt a deep and surprising ache at the thought of losing her, or any of the Wives. She had devoted years of her life to this project, defending the raptors from naysayers and any groups that wanted to harm them.

Her old college anthropology professor used to say, Humans will pack-bond with anything. She wondered if the machines they made felt the same.

It was late when Evelyn finally sent everyone else home, and headed down to the garage where the three raptors were currently at their recharging stations. It was stupid, but she wanted to say goodnight and reassure them that she would find their missing companions. Evelyn talked to the Wives a lot after-hours. She knew they didn’t understand her, but they still made a better audience than the house plant she barely managed to keep alive at home.

Evelyn had just reached the base of the stairs when a sound stopped her. She stood for a moment, listening as a series of low, throaty calls came through the open door.

The raptors were supposed to be on standby, but instead they were vocalizing, something they only did for the public. In the wild, they sometimes replicated deer calls to lure in their prey, but these noises didn’t sound like deer calls. They almost sounded like—words, like voices.

Evelyn had just started back up the stairs when the garage lights suddenly sprang on, the motion sensor triggered by six heads, not three, swiveling toward her. The mouths of the raptors gaped, as if they’d just been caught in secret conference. It would have been comical, if not for the serrated rows of teeth in those mouths, and the uncanny look of understanding in the raptors’ toy-style gazes.

Boleyn, recognizable by a red ring around her neck, clicked a sharp talon against the hard linoleum floor and tilted her head.

“This is fine,” she croaked in Evelyn’s voice.

Evelyn wasn’t sure whether it was a statement or a question, but the Wives were watching, waiting. If it was an answer they wanted, she suspected they would accept only one.

“Yeah,” she agreed, cold horror giving way to a heady rush of fascination. “This is fine.” 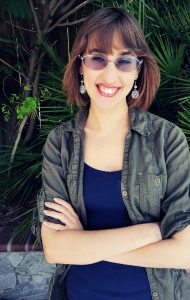 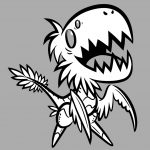