On our last two trips we got a new mattress (I don’t care what your last girlfriend did, Polyxeni said, but I’m not sleeping on the same mattress where she ate crackers) and two lamps and some dishes and one of those scrubby things shaped like a woodland creature. We hadn’t thrown tiny golf pencils at each other or gotten into a screaming fight over bookshelf assembly, and we’d only purchased one decorative floor rug.

This run of good luck might have been because on our last two trips we skipped the children’s area. So we’d missed spotting the dinosaurs.

I crawled into the kid’s play area upside down through a tunnel.  Polyxeni was not amused. She pushed a leaf canopy aside.

“Get up, Erin,” she said. “We don’t need anything in this section.”

I was about to agree with her. I was about to get up and put my skirts in order and apologize, the way I always did when she called me out for not matching her picture of an adult. That’s when I spotted the psittacosaurus.

“Polyxeni,” I said. “We definitely need this.”

It was bright purple and just over knee height, with a turquoise tail frill to match its big eyes. It tipped its parrot head and squawked at me when I leaned close. A candy-colored rainbow of dinosaurs roamed through the jungle play area. A clementine-orange diplodocus stuck its long neck out and honked at me like an angry goose. A fuschia spinosaurus tried to eat a storage cube.

I’d seen a picture of Ikea’s dinosaurs online, but somehow I’d assumed they were just plush or inflatable. Display tags showed flying and swimming models. With three product pickup codes each they had a lot of parts. I reached out a hand and the psittacosaurus nibbled my fingers with gentle rubber teeth.

Polyxeni sighed. “We’ve got a studio apartment. We don’t even have room for our bicycles.”

“We can park the bikes outside,” I said.

“Look,” I said. “You’re the one who said we weren’t ready for a joint checking account. It’s my money and I’m buying dinosaurs.”

Polyxeni sulked while we rode down the escalator. She pouted while I wandered through the aisles trying to find the codes from the pictures I’d snapped blurrily on my phone. I wanted the long necked Klarälven brontosaurus, which had parts down one aisle, and I picked up two of the little Svartån microraptors in another aisle. I couldn’t decide between the raspberry one and the teal one so I got both.

Polyxeni lost patience and abandoned me and the wheelie cart to go sit by the checkout lines, looking at her phone. I found the Indalsälven charging docks and lifted three of them up on to my cart, balancing all the littlest boxes for the gears and things with one hand and wishing I’d gotten one of the big carry bags. I snagged the last dented box of parts for the frond-tailed psittacosaurus model labeled Bräkneån.

I staggered through the checkout line and met up with Polyxeni.

She was still mad at me when we got back to the apartment but she helped me haul all the boxes upstairs. We put the kitchen stuff and hangers away and then I started spreading all the boxes out in the living room.

I got the Indalsälven charging units together first because they didn’t have that many pieces and that way the rest of the dinosaurs could charge as soon as they were assembled.

Polyxeni got herself a glass of icewater and came out to sit on the couch. She started listlessly scrolling through every streaming service app on the television.

“Pass me that allen wrench?” I asked.

She pushed it over with her foot.

“Have you seen a bag with six little packages of pink feathers?”

Polyxeni didn’t even look up from her phone. “Nope.”

Polyxeni waved at the floor around our one tiny area rug. “There are bits of dinosaur everywhere.”

Probably I shouldn’t have unpackaged them all at once. I was just excited to get them home.

“I’ll have it cleared up by morning,” I promised.

“I have to be up for work by six,” Polyxeni said. “You’re always starting these late-night projects, just because you don’t have to work until noon.” Our different schedules hadn’t been such a problem before we moved in together. We met up for brunch on her days off and happy hour on my days off. It had worked out.

I worked on assembling the second Svartån.  When the first one finished charging, it flew up on the couch and started pulling at Polyxeni’s hair. “Get it off,” she said.

Polyxeni smacked it away. It fluttered off the couch with a bent wing.

I glared at Polyxeni. “You could have broken it.”

I found a pair of jewelry pliers in my craft drawer to straighten the feathers. Polyxeni stomped off to our new bed without answering.

I knew I should go after her and make peace, but the room was full of dinosaurs.

The teal Svartån dragged the last missing bag of raspberry feathers across the floor and dropped them by my knee. It flew up to rub my cheek.

If Polyxeni moves out, I’m letting the Bräkneån charge on her side of the bed. 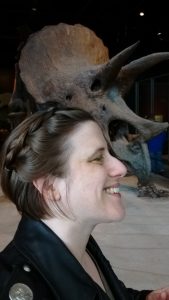