“Five Functions Of Your Bionosaur” by Rachael K. Jones 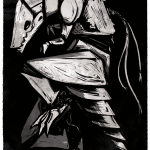 “Be A Thunder, Release A Roar” by Osahon Ize-Iyamu 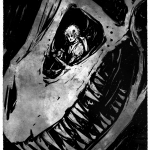 right in front of her. The dinosaurs appear with a mighty boom, with feet that hit the earth like a rumble. They make everything look so small, all humans look so little, make everybody afraid. They hold a certain kind of power Uwaila needs, a roar and gentleness that makes them perfect to watch.

“The Caretaker Noticed” by Katie Spina 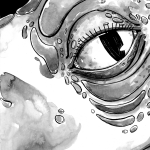 I believe they suspect. I have no one to blame but myself. 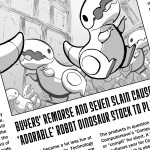 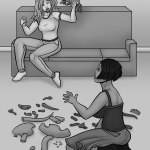 “Hunting On Ethera” by M Raoulee 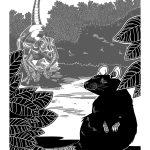 The first rat came to Ethera on a cargo ship.  It escaped planetside quarantine and fled into the blue pollen dust of the Northern continent spring.

A decade later, spring was no longer blue. 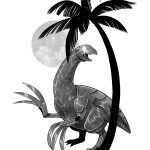 “Nessa, didn’t you like anything at the park today?” Mom leaned against the wall of their motel room and pulled off her sandals. The tops of her feet, along with the rest of her, was burnt from the Florida sun.

“The dinosaur ride was okay, I guess,” Janessa said.

“The Six Raptor-Wives of the Utah Rangelands” by Hayley Stone

It made a kind of cosmic sense. The first of Henry VIII’s wives and also the first to die—not 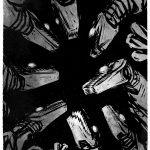 that Evelyn believed her gynoid raptor was dead. Malfunctioning or caught between some quakies seemed more likely. As emergency management specialist for Utah’s Strategic Predator Initiative, however, Evelyn’s job was not to make guesses, but to identify problems, develop solutions, and occasionally win in-house naming contests to the regret of her superiors. 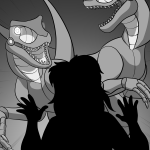 The robots had learned to open doors.

Priya jumped as the door between the shared lab and her office crashed open. Into the paper-strewn space stomped a pair of raptor-sized machines, gleaming chrome and glittering eyes. Their sickle-shaped toe-claws—really just blunt grabbers, but intimidating to look at—scrabbled at the carpet as they adjusted their positions. Then both robots hopped onto her desk, scattering papers everywhere.

“Even to the Teeth” by Karen Osborne 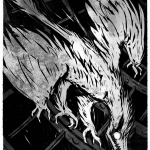 The way to save yourself, o captain, is simple.

You must leave everything—your star-splayed chair on the bridge, your full belly, the soft, silk robes in the first-class chamber where you sleep—and come down to where we are dying. 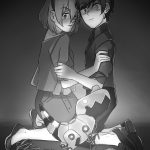 I reach over and take the remote, switching the holo away from the reporter talking about the coming storm and running through channels. 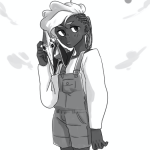 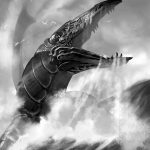 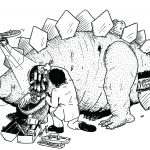 darkened interior of the abandoned ride. Inside smells like rust and stale water and plastic fused with metal. 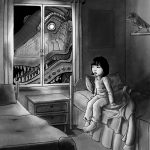 Arden heard a car door slam and her heart thumped in her chest, but when she looked over her shoulder, the street was empty. This late at night, she was supposed to be tucked in bed and fast asleep. Instead, she stood in front of the big Rexotron 3000 statue on the park playground, his steel teeth gleaming under the street lamps in an ear-to-ear grin.

“When I Was Made” by Kathryn Kania 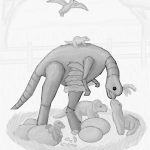 When I was made they gave the ability to teach. This was difficult, from what I have

heard. Not only did they have to code into me adaptation to different stimulus but the ability to teach what I had learned to smaller, clumsier, slower versions of me that didn’t think quite as well. They, after all, would not have a computer for a brain.

“The Dinosaur Graveyard” by Aidan Moher 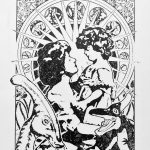 The bot’s heart was beyond repair. Frustrated, I tore it free of the chassis, wire filaments snapping like old guitar strings. The heart usually pulsed with crimson light, but was now dark. Dead. I dropped it into a bowl on my workbench with a metallic ting, almost drowned out by the drum of rain on the corrugated roof.

“The Tail of Genji” by Aidan Doyle

It’s not easy to rent an apartment in Tokyo if you’re a giant robot lizard.

“We don’t have anything that meets your needs,” the rental agents would say.

Genji had similar luck when it came to getting a job.

The Mei long was nearly complete before Grace worked up the nerve to ask Samantha about the feathers. Grace had started on the dinosaur after she’d been diagnosed with the Canine Flu, and it had taken most of the loneliest year of her life, but now the gears and wires were in place, the casing all but finished.

I met Shi on Lala Online Meet&Chat. She outwitted me with her fast talk. Her profile showed her long, black hair cascading over her shoulders and a wide smile, so different from my short, spiky hair and thin lips. Unlike many of the other cosmopolitan bachelorettes on Lala, she didn’t cake her face over with layers of makeup. In a lot of her photos, she wore jeans and permutations of dinosaur shirts.

Probe was more of an anthropologist than a celestial object. It hit the planet’s atmosphere, coming out of sleep mode as friction tried and failed to burn it up. Probe had come too far to go that easily. After breaching the atmosphere, planetfall was easy. Mostly, you just fell.

“Regarding the Regretful Repercussions of Replicating Robot Reptiles” by Michael M. Jones

“Oh my god! I can’t believe you made me robot dinosaurs for my birthday! And they’re so cute!” I gazed down with sheer delight at the tiny mechanical marvels currently lumbering across the kitchen floor.