I reach over and take the remote, switching the holo away from the reporter talking about the coming storm and running through channels before I find a reality show, chaotic and inoffensive.

She works in the same lab that I used to, but she’s lasted longer. I don’t know how. A lot of climatologists don’t even make it through school before the work gets to them and they burn out.

I start switching channels again, just to give my hands something to do. I settle on reruns—My Friend RoboRex, on a cartoon channel. It’s easy to watch, the tinny voice of the main character’s robot T-Rex companion comforting. Kara and I grew up on it.

“Let’s build a robot dinosaur,” I say under my breath.

I repeat myself, louder: “Let’s build a robot dinosaur. Something to do, while we wait out the storm.”

Kara sits in silence for a long moment, pulling her knees up to her chest and giving a short, noncommittal hum. “We don’t know anything about robotics.”

“It’s a distraction,” I offer.

Kara doesn’t reply for a long while. The episode ends before she says softly, “Yeah. Yeah, why not?”

We don’t know anything about robotics.

We look up some basic plans and order everything we think we need via two-hour drone shipping. It arrives at the same time as the rain, but has a chance to get away before the water starts coming down in sheets.

We’re not so lucky, though if I could pick anyone in the world to be trapped in an apartment with while the twenty-fifth named storm of the season rages outside, it would be Kara.

For having been hesitant to start building the robot T-rex, she’s surprisingly quick to take point.

“Jay, hand me that wire?” she asks, looking between her phone and the shell we’re slowly filling with chips and wires we only half-understand. “The blue one?”

I nod, holding the chip I’m working with in place with one hand while I root around in the piles of spare parts we’ve scattered around us. “Which one? There’s three.”

“Uh…” She pauses and expands the image on her phone. “That one?” She points. As I hand it to her, she seems less and less sure of herself.

Lightning flashes outside as she installs the wire, so I don’t notice the sparks at first. What I do notice is the way her face falls and she pulls her hand away, the wire smoking in her fingers.

Kara reads to me from the instructions on her phone, shouting over the storm outside. Our building is reinforced against extreme weather but others are not so lucky. While she tells me what to do, a news notification comes in and she reads that too—a small town far closer to the coast than we are is not expected to resurface when the skies clear.

As she falls silent, my hands fall still. All those homes, and no way to know right now if the people who lived inside them were able to evacuate.

Kara’s phone lands on the floor, the flexible screen bending to absorb the shock. She is less equipped for the impact—when her knees hit the linoleum, I can almost feel it in my own joints.

I want to say that yes, me too, I hated my job and I hate yours and I’m sorry we picked this for ourselves, but instead I shift closer to her and hold my arm out, a soft offer.

She takes me up on it, hiding her face in my shoulder. She’s not crying. She’s just breathing, hard and measured, into my skin like it’s an air filter. “I’m gonna quit,” she says.

“What am I gonna do after?”

I try to think about what I did after I left, last year. I don’t know how to tell her that I slept for a month and couldn’t watch the news for two, and I still don’t walk past the lab complex without wanting to cry.

I say nothing, just let my best friend breathe into me for a long and otherwise silent few minutes. One-handed, I fit a blue wire—a new one—gently against what I think is the right chip.

In front of me, the T-Rex’s eyes flicker to life. The sound of its metallic blink is barely audible against the storm, but Kara must hear it too, because she pulls herself away to look.

A faint smile pulls at the corners of her mouth.

“Maybe we can build dinosaurs,” I say, watching her watch the robot blink.

It’s another week before the flooding subsides and we can leave the apartment. The air is thick when we go, hot and humid after the storm, and Kara wipes her hands on her black slacks every few minutes as we wade towards the lab.

When I dry my own clammy hands, I try to hide it. It gets harder the closer we get; it feels just like my own resignation walk.

As we get closer, bodies small in the building’s shadow, Kara’s steps slow next to mine, and I remember this too.

I watch as Kara’s jaw works. She doesn’t answer me, but her shoes fall hard on the steps as she walks in. 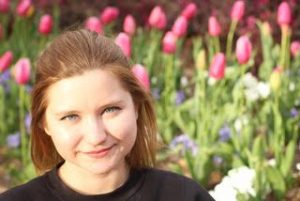 Alina Sichevaya is a student and writer based in North Carolina. Their work has previously appeared in Strange Horizons and is forthcoming from Glittership, and they were a finalist for the 2017 Dell Magazines Award. They are a graduate of the 2016 and 2017 Alpha Workshop for Young Writers. They can be found on Twitter @alina_sichevaya.

This story was illustrated by Kosmic Arts!